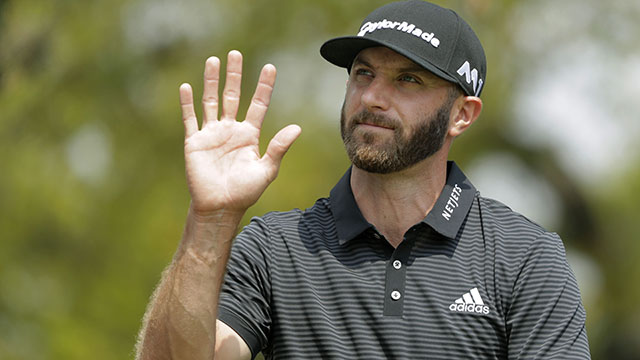 The Masters at Augusta National begins today and the world’s No. 1 player, Dustin Johnson, may not be able to participate after falling down a flight of stairs and injuring his lower back at a rental home near the course.

With Johnson’s history of drug abuse and other behavioral problems, he’s always a popular topic on social media when major events roll around, but this incredibly untimely tumble just two days before golf’s biggest tournament has fans on top of their joke game.

Everyone calm down with the Dustin Johnson injury, Happy Gilmour got hit with a Volkswagen and still beat Shooter #themasters2017

Even Kaz Sasaki is suspicious about the circumstances of Dustin Johnson’s back injury.

Dustin Johnson trying to get out of bed today #TheMasters pic.twitter.com/l8lFz7w5jb

If you’re the guy who rented Dustin Johnson his Augusta rental house, how thoroughly did you review your home insurance policy yesterday?

All jokes aside, it’s beginning to look like Johnson will be able to play. The latest official update from his trainer states that he is “up and moving around” and “definitely going in the right direction” as of Thursday morning, about five hours ahead of his scheduled tee time.

Those betting money on Johnson to win the tournament also took to social media expressing their anxieties. He was a heavy favorite to win, but has since slipped (no pun intended) into third behind young guns Jordan Spieth and Rory McIlroy.

Me : puts 80% of money available till payday on Dustin Johnson to win Masters

When you originally planned on betting $100 on Dustin Johnson winning the masters and then hear he feel down a flight of stairs pic.twitter.com/4tNNQDkldw

Really Dustin Johnson? The year I put money on you in vegas, you forget how to walk?

Even with an injury, you can’t count a player of Dustin Johnson’s caliber out. He has 15-career PGA Tour wins including three in 2016 and three already in 2017.

What’s missing from his highly-successful career? A green Masters jacket.

Ashley Conley is a senior journalism student at WVU. She aspires to become a writer or reporter in the sports industry upon graduation. You can follow her on Twitter @ashleyconleyyy.